The banking sector in Kenya after The Banking (Amendment) Act 2016: A review of the impact of interest capping on access to finance

This blog reviews the impact of interest capping on access to finance in the banking sector in Kenya after The Banking (Amendment) Act 2016: Read more.

In Kenya, interest rates have historically been driven either by the market or through regulation by various amendments of the Banking Act. The weighted interest rates of commercial banks hit an all-time high over the past two decades between 1995 and 1998, averaging between 25.03% and 29.49%. During this period, commercial banks had started to diversify into the low-income segment. This segment had been considered riskier and less lucrative because of low-value transactions and, therefore, considered a preserve of microfinance institutions. The year 2004 marked the time when commercial banks in Kenya offered the lowest lending rates in recent times, an average of 12.53%. Over the next 10 years, the weighted average rates in the banking industry increased steadily and pushed towards capping the interest rates constitutionally.

Below is a snapshot of the weighted interest rates trends for the commercial banks in Kenya for the years 1995 to 2016. 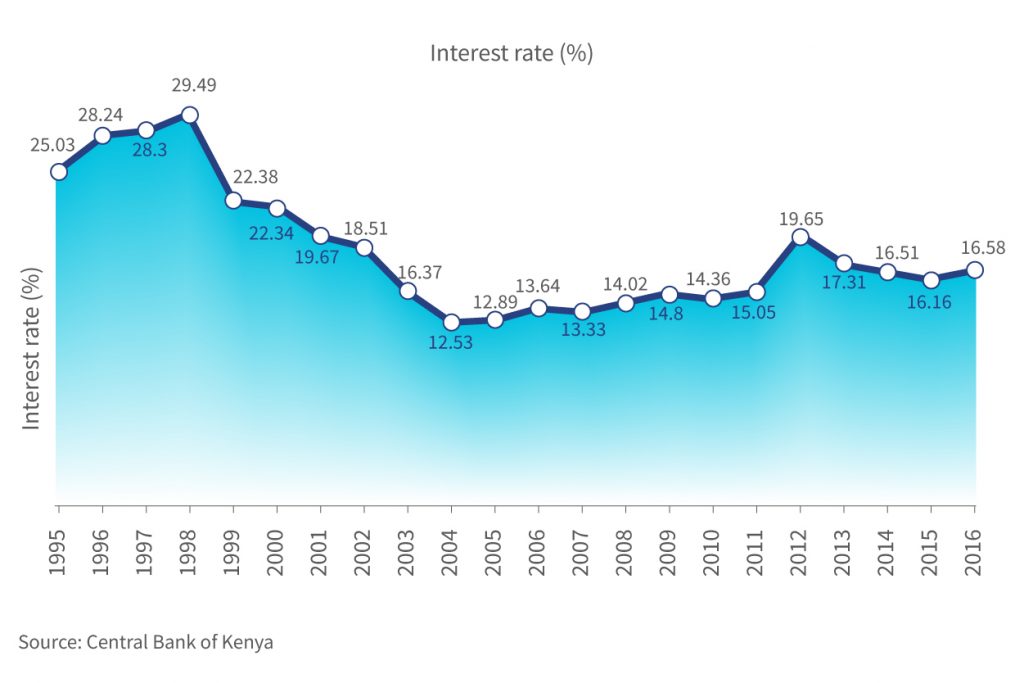 In 2001, a bill was passed by parliament which introduced lending rates caps at 4% above the 91-day T-bill and deposit rates at 4% below the 91-day T-bill. Popularly known as the “Donde Bill”, banks contested it in court and the bill was reversed even after the then President had accented to it. The second attempt to cap interest rates came in 2013, where Kenya’s Parliamentary Budget Office proposed that the deposit rates be pegged to the lending rates. This too did not succeed. The two bills failed, based on the government’s preference for free-market interest rates as opposed to caps. The Central Bank of Kenya also asked banks to self-regulate and to take measures that would reduce the cost of credit—to no avail.

In a further attempt to have the banks lower their lending rates and enhance transparency in credit to the private sector, Central Bank of Kenya (CBK) introduced the Kenya Banks Reference Rate (KBRR) in July, 2014. The KBRR sought to have banks disclose and explain to their borrowing clients the effective base lending rate and any additional premium above the base rate. When it was introduced, the KBRR was set at 9.13% with a review to come after every six months. On 14th January 2015, CBK conducted a review and the KBRR was further reduced to 8.54%. However, lending rates from banks did not reduce.

Ultimately, in mid-September 2016, following various campaigns by legislators to revive the Donde Bill, CBK introduced interest rate caps through the Banking (Amendment) Act 2016. The act limits banks from charging more than 4% above the Central Bank lending rate, while the deposits attract a minimum of 7% on the benchmark. As at 28th May 2018, CBK had set its benchmark interest rate at 9.5%.

The drive towards the capping of interest rates was meant to stop arbitrary hikes in the lending interest rates, make credit more affordable, and hence promote access to credit to the private sector. Through this intervention, it was envisaged by CBK that the reduction in rate would spur economic growth and lead to the creation of more jobs while ensuring that the operations of the banks remain sustainable. An assessment of the profitability of commercial banks in East Africa countries shows that Kenyan banks were the most profitable over the period between 2012 and 2015. 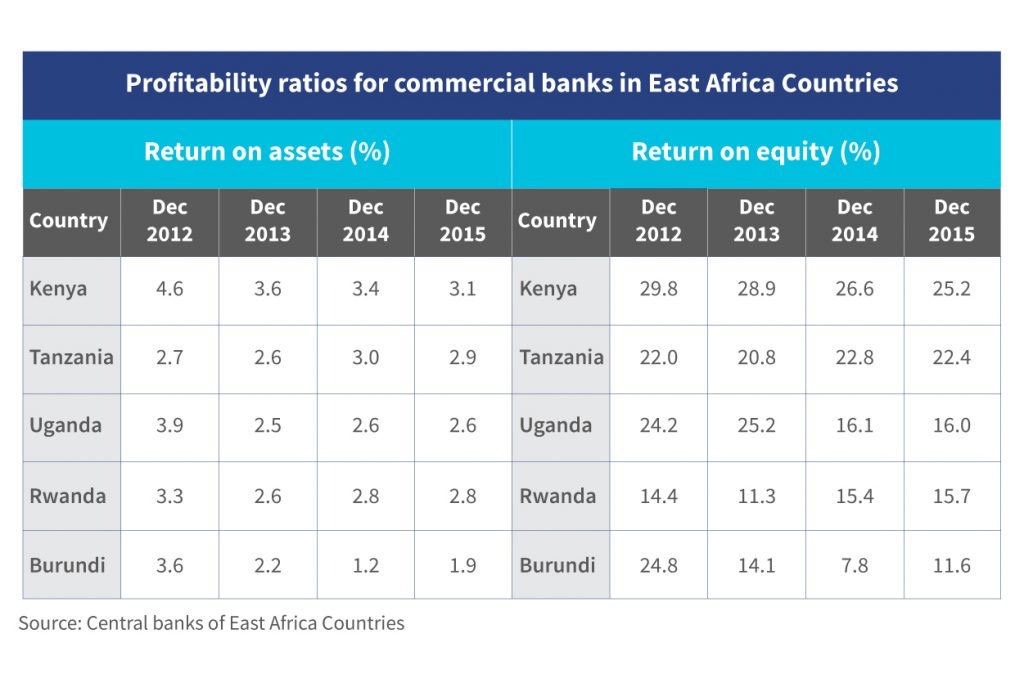 The growth of credit to the private sector registered a decline during the first nine months of the year 2017, while 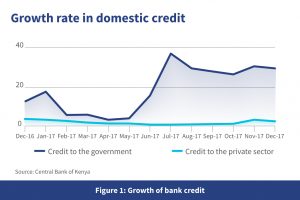 credit to the government registered a huge growth as shown in figure 1. The decline in credit to the private sector was attributed to the uncertainty around the elections period as well as the stringent loan requirements following the interest rate cap. There was an increased appetite by the banks to lend to the government because of the inherent minimal risk—hence the huge growth registered in 2017.

It has now been over one and a half years since the interest rate cap came into being. Borrowers now repay loans at a maximum of 14% per annum while depositors earn a higher interest rate on their deposits. This is also true for loan contracts made before the law was passed. However, the Kenya Bankers Association’s economic bulletin of Q3 2017 shows that non-performing loans (NPLs) have continued to soar. Between the second and third quarter of 2017 alone, the gross NPLs increased by 6%. Because of the small-ticket loans from digital credit, these did not have much impact on the overall NPLs in the banking sector. The NPLs were generally attributed to the harsh business environment in the country. Figure 2 shows the trend of NPLs since the year 2011. 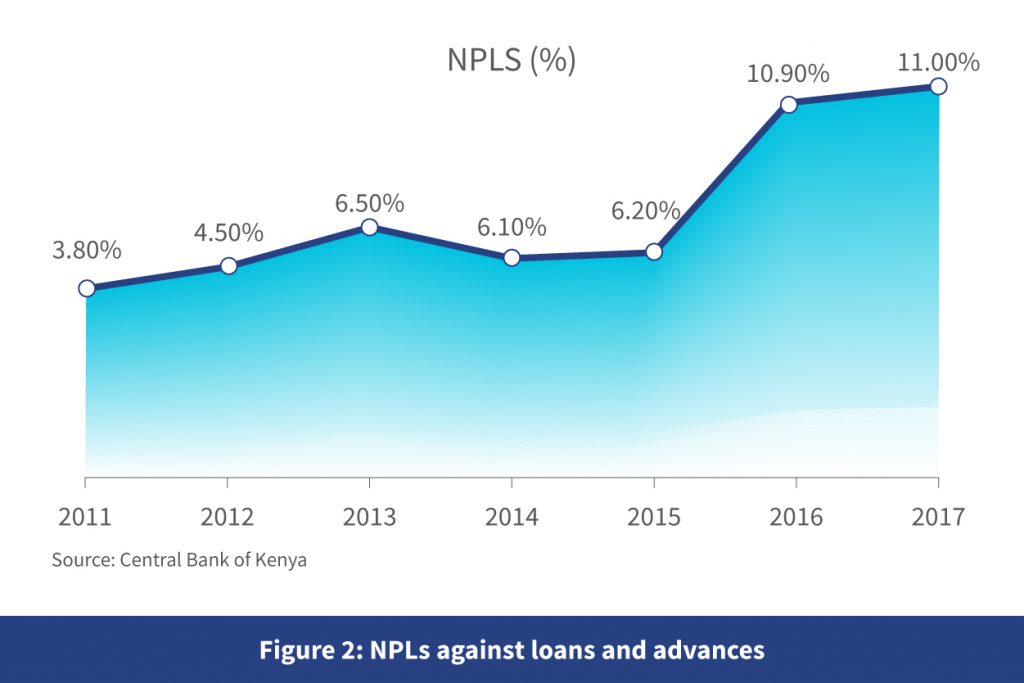 There have been specific impacts and outcomes in the Kenya banking sector since the enactment of the Banking Amendment Act 2016. Key among them are:
• Conversion of savings accounts into transactional accounts by commercial banks, which allows them to avoid paying interest
• An increased focus on digital lending models—Equity Bank, Co-operative Bank, and KCB have been disbursing small loans using digital channels; digital loans are usually priced higher than the cap
• An increased focus on digital channels with banks, such as Bank of Africa closing down some of its brick-and-mortar channels
• Tightened loan requirements to mitigate default risks previously covered by higher interest rates—Loan requirements have become more stringent, particularly for entrepreneurs that do not have immovable collateral to secure loans
• A decline in consumer lending, as the segment has now been profiled as “risky”, following the caps
• Increased fees, such as loan processing fees to mitigate declining income from loans
• Increased demand for credit from SACCOs, MFI, MFBs, and informal financial lenders—while the interest margins for these lenders are quite exorbitant, they do offer stress-free collateral requirements compared to commercial banks.

What is next for the banking industry and the borrowers?
The strategic changes made by commercial banks to comply with the interest rate caps and the protracted disputed election of 2017 have had an adverse effect on the Kenyan economy. Profitability for the commercial banking sector in 2017 slowed down compared to 2016. The table below shows the profitability of banks in Kenya over 2016 and 2017. 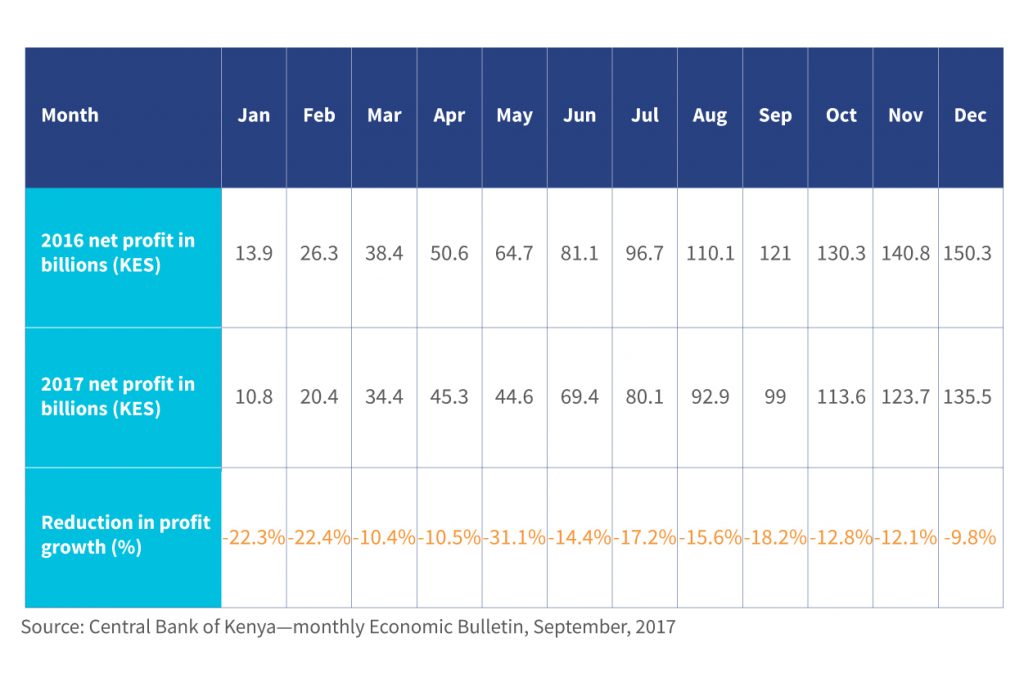 In addition, the enforcement of the International Financial Reporting Standard (IFRS) #9, which took effect on 1st January, 2018, has triggered a preference for shorter loan tenures and relatively smaller loans to reduce the risk of default among borrowers whose credit rating is low. With all these in mind, banks are likely to be even more stringent in lending to minimize default. Access to finance, especially for entrepreneurs, is likely to be even more difficult.
The question is—where do these dynamics place the borrowers? If they wish to access loans easily in the future, borrowers need to have a good repayment record. Borrowers may need to be educated and sensitized on these developments to promote awareness and thus improve their loan repayment discipline.

Applying more stringent loan requirements means a reduction in lending, which may lead to reduced profitability. For the borrowers, a reduction in access to credit may further slowdown wealth creation and thus slow economic growth.

Banks have been pushing for the act to be repealed since its enactment. IMF has also supported the proposal to repeal the act. During the 2018-2019 annual budget speech, the Cabinet Secretary to the National Treasury proposed a repeal of the Interest Cap Act, citing its adverse effects on financial access and economic growth. Kenya has already witnessed a reduction in credit growth to the private sector from 13.5% in 2016 to 2.8% in April, 2018.

On 14th March 2019, the high court of Kenya ruled that the law that caps interest rates at 4% above the Central Bank rate is unconstitutional. However, a 12-months’ window has been provided from the date of the ruling for the parliament to reconsider the provisions of the act. Given this ruling, consumers of credit, that is, the private sector, are not sure whether interest rates will increase once again to previous levels where credit affordability was a burden. Meanwhile, the question remains—which is the better option for credit consumers, the financial sector, and other stakeholders?