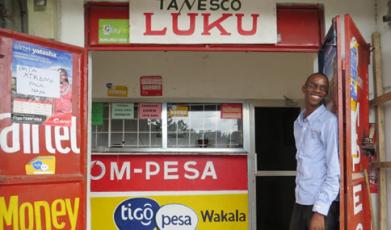 The survey includes all providers offering agent banking or mobile money services, taking special interest in the country’s three main providers: Vodacom, Airtel and Tigo.  These three providers absolutely dominate the market and continue to grow at quite robust rates, pioneering a unique model for developing agent networks which can be used as a paradigm for providers around the world. The data also shows where providers need to focus their energies in order to improve the quality of the agent networks in the country, which is imperative at this juncture when many providers are looking to stack more sophisticated services (like banking products) over them.

If an agent offers services for more than one provider, it is considered “non-exclusive” and in markets like Kenya, and Uganda where there is a clear market leader, the majority of agents are only able to serve the leading provider.  However, most markets do not have that dominance, and Tanzania is a better model for them.  In Tanzania, about half of all agents are non-exclusive, and in the capital of Dar es Salaam, it is 84%.  This means agents are able to conduct transactions for and earn commissions from multiple providers, leading to a very small number of agents being unprofitable (4%), and agents earning a healthy median profit of $US 95 per month. 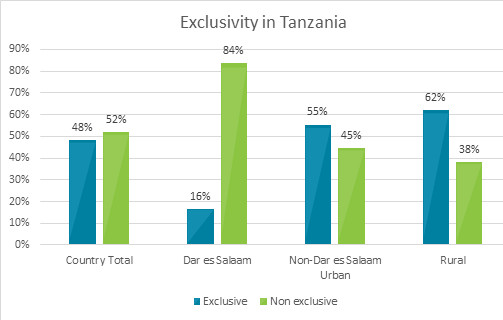 It is however, noteworthy, that almost two thirds of agents in rural Tanzania are still exclusive. This is an artefact of Vodacom being the first to aggressively expand beyond urban areas, but now competitors are following suit and therefore we expect it to be increasingly non-exclusive in the future.

While the high levels of non-exclusivity of agents buttresses profits, it also causes liquidity shortages for the agents (agents are forced to manage separate liquidity pools for different providers since systems are not interoperable). This is compounded by agents who are not motivated to actively manage their liquidity, preferring to wait in their shops until customers make transactions which gives them the needed liquidity instead of traveling to a rebalance point.

This has many effects on the character of the agent network.  For providers, it means that it is hard for them to maintain agents where rebalance points are far away (rural areas). In the paper, Where’s The Cash? The Geography Of Cash Points In Tanzania, Ignacio Mas and Agathamarie John found that 83% of Vodacom agents are located within five kilometers of a bank branch. The Agent Network Accelerator (ANA) report highlights that 69% of agents take 15 minutes or less to reach their rebalance point, reinforcing the finding that agents are still tethered to rebalance points, and it is constraining the expansion of agent networks to rural areas.

Insufficient liquidity further damages the business model and reputation of agents where they are located.  The ANA report emphasizes that lack of liquidity at the agent level causes the loss of an median of five transactions per day (14% of median transactions per day), and of course will damage agents’ reputations as dependable and trustworthy service provider complicating the future ability to offer banking services through these networks.  Clearly there is a huge potential for providers to help improve liquidity management at agents – through the use of master agents (commonly called aggregators in Tanzania) and, in the longer term, interoperable systems that will eliminate the need to keep multiple liquidity pools. In the meantime agents are setting up informal arrangements with other agents and shopkeepers in their locality to try to mitigate the liquidity challenges.

The Future of Digital Finance in Tanzania

Tanzania has certainly crafted a unique and impressively successful ecosystem for mobile money.  It is much more developed than Uganda in terms of the quality of agent support, and the profitability of agents.  It is even leading Kenya by pioneering the non-exclusive agent network model.  However, the Agent Network Accelerator report shows that fraud is still plaguing its network, liquidity management issues are rife, and it is still having trouble with account opening for new customers.

Tanzania is full of potential, yet really still in its infancy with product development.  While agents in Tanzania mainly only provide cash in/out services for people’s mobile wallets, there is a lot of talk about deeper integration with banks to offer services like savings and loans, and there is already the beginnings of a merchant network being built where people can use mobile money to pay at retail outlets.  However, these frontier innovations will continually be stifled by some fundamental operational issues in the agent network that need to be addressed in order to support these and other more sophisticated services to be offered across the country.