At MicroSave we are often asked to advise mobile network operators (MNOs) and banks on their “go to market strategy” for digital financial services (DFS). A growing number of MNOs are thinking that pushing an over the counter (OTC) led strategy will be the most effective. They could be right … and wrong.

If one looks at the explicit customer needs, it’s clear that the largest, most obvious “pain points” are two types of transactions: remittances and bill payments. Remittances because a large percentage of people are migrants and need to send money home; and bill payments since, the billers will not provide credit and are likely to disrupt supplies if not paid on time. Therefore, it’s getting clearer by the day that remittances (and possibly bill payments) are emerging as the most common “anchor” products for mobile money deployments worldwide.  And, of course, in some markets G2P payments (benefit transfers, salary payments etc.) can also play this important role. 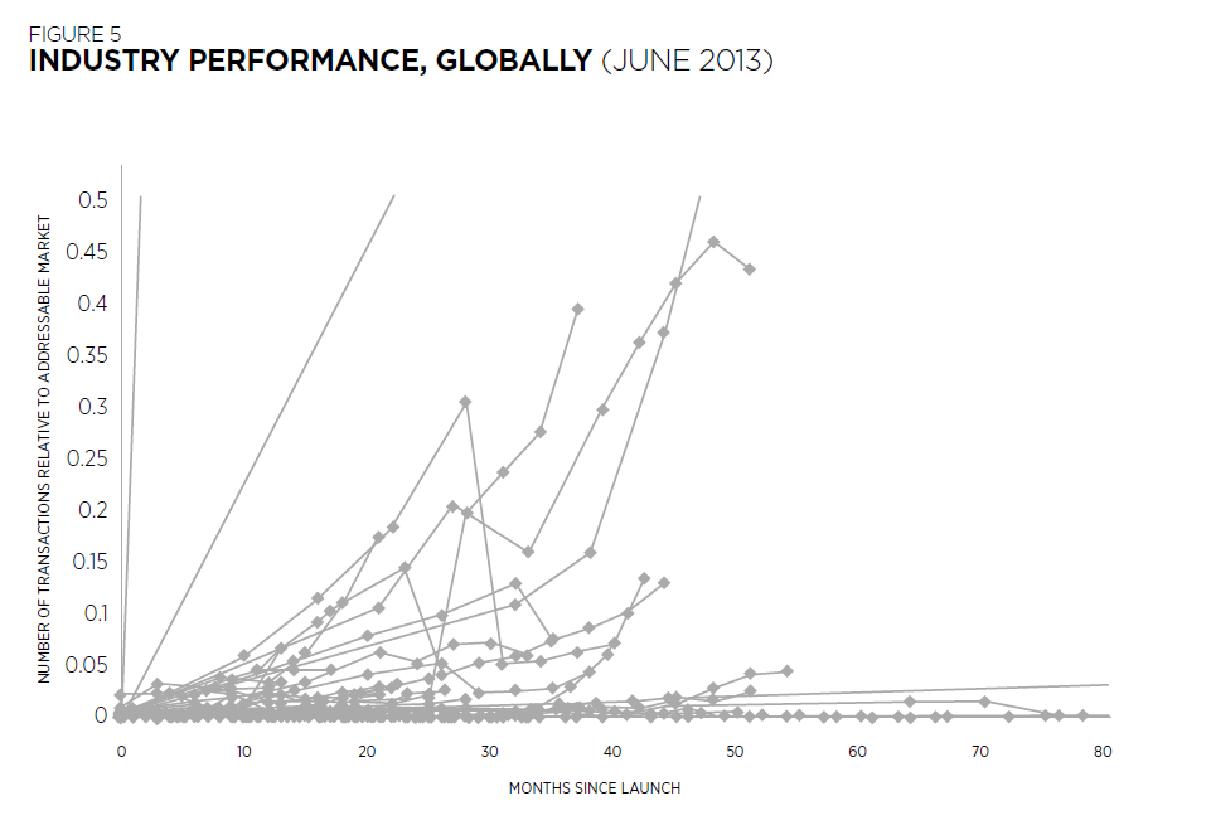 Let’s first look at the needs of the MNOs. Mobile money business has three drivers: (1) scale; (2) throughput and (3) yield. Very few MNOs (out of 219 deployed so far) have witnessed a hockey stick growth with mobile money deployments (see MMUs deployment graph on the left from State of the Industry 2013 Mobile Financial Services for the Unbanked).

So the mobile money business is growing at rates much slower than expected by most MNOs, and the active base is far smaller than the total customer base.

The second most important driver for their business is throughput. The fastest way to get higher throughput, given that customers are not yet transacting themselves, is to open up OTC for larger value transactions like remittances. Here the customer just walks in and hands over the cash, pays a fee (usually higher than a merchant subvention fee) and the cash finds its way to the receiver. Once you have the OTC agents at the right location, the value of the business just grows by leaps and bounds. This is quite evident from what happened in Pakistan, and Bangladesh. Early deployment of mobile money in Bangladesh has opened a lot of accounts but still experiences significant levels of OTC use. “Despite being a relative newcomer in the mobile financial services arena, Bangladesh, which entered the market in 2011, is already making its mark. There are about 13 million registered mobile banking accounts in Bangladesh as of January 2014 and nearly $900 million in transactions per month through about 150,000 agents (Bangladesh Bank).” – Pial Islam in – Transitions from OTC to Wallets: Evidence from Bangladesh

In Pakistan too, OTC has been the preferred deployment strategy. “The service of OTC remittances is the dominant activity for EasyPaisa as well as in Pakistan’s overall mobile phone banking services industry, which processed forty-one million transactions, worth $1.6 billion in the first quarter of 2013 (State Bank of Pakistan). Only 2.4 million customers have mobile phone wallets equipped with EasyPaisa accounts , though we have collected the unique names of another 5 million unique users who use EasyPaisa for OTC payments” – Nadeem Hussain in “The “EasyPaisa” Journey from OTC to Wallets in Pakistan”

Since the mobile wallet is not yet interoperable, OTC appears like the only way to get to the competition’s customers. This often misleads the senior management, somehow alluding that the business is getting better, at least on two parameters: throughout and yield!

Alas! This is the beginning of the OTC Trap. The operations staff hopes against hope that somehow the customer will see value and move to self-initiated transactions himself. MNO sales staff also finds itself less pressured, as it just needs a better incentive structure for the agent to get him to push the transactions through their system – as opposed to that of their competition. The customer does not care which system the agent is using, as long as the money reaches and is on-time. He trusts the agent. Both targets met, quite easily!

Banks also often promote OTC since that’s the way they’ve always done business. This simply means no change in behaviour for either the bank or the customer. The only thing is that the transaction has moved away from the bank branch to the agent location. Very often the OTC agent is quite close to the bank branch and actively attracts bank customers – the bank does not mind at all – it is “de-congesting” its branches, allowing higher value customers to access the branch. The current market pricing highlights that the banks want this business, as the pricing offered by the bank appointed OTC agents is already much lower than the 5% being charged by India Post.

Price Comparisons, based on MicroSave field research (all prices in Rupees)

This has led to a very competitive environment in the metros – see Remittances: The Evolving Competitive Environment

For the customer, OTC has many advantages. First, the customer does not need to change his behaviour or learn a new, possibly intimidating, technology. The OTC transaction looks/feels much like a purchase of airtime top-up, with which people are familiar. Second, he still does not understand, why is a MNO pushing him to open an account especially when he lacks the understanding of how opening a mobile wallet can improve his life. The customer is often attracted to OTC as a result of a combination of factors:

Also, the mobile wallet entails extra steps, usually the agent is required to facilitate cash-in or transfer so why should a customer make the extra effort to do the transaction themselves?

This just goes to say that all stakeholders (MNO, banks, agents, and customers) appear happy with OTC, but are they really?

We’ll cover that in the next blog, watch this space!