What Is driving agent churn in the mature East African markets?

One of the most striking findings from TheHelix’s Agent Network Accelerator (ANA) surveys has been the high levels of agents that have been in business for less than one year. So if agent churn is indeed so high, what might be driving it? 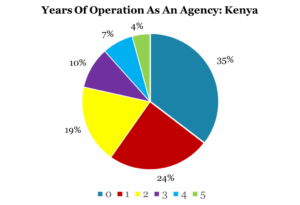 We know, for example, that in 2013 Kenya Safaricom tried to persuade M-PESA agents to hold more liquidity by increasing commission rates on higher value transactions. When this had little/ no impact on agents’ liquidity holdings, Safaricom returned to their original approach of saturating the market with agents. This allows customers seeking to conduct larger transactions to either go to the larger agents that hold bigger liquidity pools (for example those of PEP Intermedius) or split the transaction across several of the larger numbers of smaller, less liquid, agents. MicroSave’s qualitative research indicates that this is now essentially accepted market practice in Kenya. But rapid agent network growth is unlikely to be the full story.
In Uganda 78%, and in Tanzania 70%, of agents expected to be in the agency business in a year’s time. This implies a latent churn rate of 22-30%, which is somewhat alarming, given the requirements to locate, onboard and train new agents. (Although the ANA data suggests that most providers, with the notable exceptions of Safaricom and Equity Bank, still provide limited training, monitoring, and support services. This is sad, given that so many of agents’ operational problems, particularly round fraud management, could be mitigated by these basic maintenance activities). 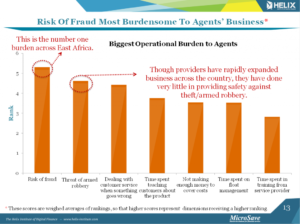 But the projected churn figures in Uganda and Tanzania are positively reassuring compared to Kenya, where only 58% of agents said they thought they would be an agent in one year’s time.  So if agent churn is indeed so high, what might be driving it? 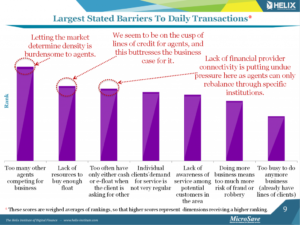 We began to unpack this in the blog Challenges to Agency Business – Evidence from Tanzania and Uganda. And, as can be seen from the graph, the findings in these two countries were reflected again in the most recent Agent Network Accelerator data from Kenya, where once again the risk of fraud and armed robbery topped the list; closely followed by the challenges of dealing with customer service when transactions go awry or the system is down.

Agents primarily ascribe this to, “Too many other agents competing for business” as well as (to a lesser extent) challenges around float management. Should we conclude that “saturating the market” has limitations and drawbacks as a strategy?