Over the counter transactions – Liberation or a trap? – Part I

The first blog in this series highlights that over the counter (OTC) transactions alone cannot deliver the digitally enabled financial inclusion many of us are working towards.

The cause for concern

I am back obsessing about over the counter (OTC) transactions again. Before we dive in let’s quickly define OTC transactions as they come in many forms in different markets – from the direct deposit by the agent into theend user’ss wallet in Kenya to the transfer of money from one agent to another agent, with or without identification, in Pakistan and Bangladesh respectively. The common factor is that at least one end of the transaction is conducted without involving the wallet of the user – either the sender or the receiver.

There are clearly very good reasons for agents and customers, and even some go-to-market reasons that might entice providers to want an OTC service; but the long-term downsides for all, except agents, concern me greatly.

In their December 2012 paper “A Digital Pathway to Financial Inclusion”, Dan Radcliffe and Rodger Voorhies of the Bill & Melinda Gates Foundation outlined how basic mobile connectivity and digital remote payments are the first two necessary steps towards an inclusive digital economy. I believe there is a very real risk that providers which leverage OTC transactions to reach massive scale will get caught in the OTC trap. They will find (and in many case have found) that:

They and their customers will then be stuck in Stage 2, the payments only step of Radcliffe and Voorhies’ stairway to an inclusive digital economy. 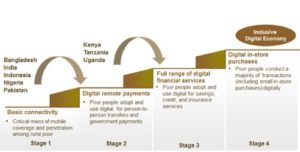 This is not the financial inclusion we are all seeking through digital financial services. Payment services are immensely valuable for the poor, no doubt – but access to payments does not result in what most people would define as “financial inclusion”. And yet access to basic mobile money payments is already effectively being touted as “financial inclusion” (see box for one example of many). Once again, we are risking what a leading expert cited in Do the M-PESA Rails Contribute to Financial Inclusion? described as “low equilibrium financial inclusion”. We have already seen how ineffectual it is to ask the poor to run the marathon out of poverty on one leg through the growing body of short-term RCT studies that suggest microcredit alone has limited impact. Countless studies, most notably The Portfolios of the Poor, have documented the poor’s needs for a range of financial services encompassing savings, credit, payments and insurance. Offering the single leg of payments and asking the poor to run the marathon will have similarly limited results.

The root of the problem?

Indeed it may be the lack of credible wallet-based product offerings that are driving the predominant use of OTC transactions in many countries. If providers are unable to build and rollout products that offer real value to customers, then registering a wallet may well be an unnecessary and time-consuming exercise, not just for the agent, but for the end user as well. The most obvious use of wallet-based services (for MNOs at least) after airtime top-up is bill payment. So the limited use of these services by Kenyan adults (of whom 68% are registered users) according to Intermedia’s Financial Inclusion Insights from September-October 2013, is surprising and alarming (see Table). The same survey noted that for all the publicity only 15% of active mobile money users had used M-Shwari. Clearly, sign-up and use are very different things, as we had surmised when we wrote M-Shwari: Market Reactions and Potential Improvements.

As Mike McCaffrey and Anastasia Mirzoyants concluded in their blog The Human Touch Required to Evolve Digital Finance, “After several years of development in the industry we do seem ready to make the leap to more sophisticated services, however, given the business models the telecoms have developed that encourage channel detachment, it might just be the banks – slow and steady – that invest correctly in the human touch that brings the needed trust.”