Anchoring Agent Commissions: How Much is Enough?

How much does an agent need to earn to be satisfied, and stay motivated enough to provide a high quality of service to customers?  Behavioral science teaches us that people anchor their appraisals of value to other numbers around them in the ecosystem. Marketing firms understand this concept well, often enticing us to perceive a […]

How much does an agent need to earn to be satisfied, and stay motivated enough to provide a high quality of service to customers?  Behavioral science teaches us that people anchor their appraisals of value to other numbers around them in the ecosystem. Marketing firms understand this concept well, often enticing us to perceive a product as affordable by placing it next to a similar higher priced product (e.g. different brands of wine) on a supermarket shelf.  In this example, people anchor their judgment of what the product is worth relative to the high priced item, and subsequently judge the other of good value, hopefully then happily buying it.

However, people do not always anchor judgments of value to what is physically around them, sometimes the anchor comes from past or predicted future experiences.  When a product in a store is discounted, people are more likely to purchase it as they anchor their perception of its value to what it used to cost them, even if that price was inflated to begin with!

With regards to agents, it is important to understand to what they are anchoring their revenue, as that is effectively what will determine their level of satisfaction with it.  There are a number of obvious options, like the monthly wage of the person they employ to conduct the transactions, or the revenue they earn from another product they sell like Coca-Cola, and more research would be revealing as to what determines how these anchors are chosen.

What our research revealed is that these anchors can be quite dynamic, changing overtime as the business model for digital finance changes.  This is very important to understand as the business model in digital finance always evolves as it scales and diversifies, and it is imperative to keep agents happy through this process so the quality of service remains high throughout these transitions.  We interviewed 60 agents in Kenya and Uganda, and looked through data from The HelixInstitute of Digital Finance to identify some important events in the evolution of the business model that seems to affect which anchor value agents use to evaluate their satisfaction with the digital finance business.

Interestingly, data from Helix Institute research in Bangladesh and Kenya, showed that while agents are earning relatively the same amount in monthly commissions US$170 vs US$175 (in PPP terms) respectively, in Kenya only 58%  of agents predicted they would still be an agent in a year’s time, vs. 86% of agents in Bangladesh.  When we include Tanzania and Uganda in the analysis and compare the percentage of agents predicting they will continue as an agent to the market penetration rates for mobile money in those respective countries, the results appear to show a very strong negative correlation.

This leads us to believe, as mobile money penetration in a country increases, there are less new customers to register, and the growth rate of the service starts tapering off.  This would cause the median agent commissions to decrease, or at least increase at a decreasing rate (holding a handful of other variables constant), and lead to lower levels of willingness to continue, as agents are comparing their future earnings to those of the past.  Therefore, in Kenya where market penetration is higher, we observe a smaller percentage of agents willing to continue as opposed to Bangladesh where the market is still ripe for growth and agents are much more dedicated to the business – even given they are earning relatively the same amounts. 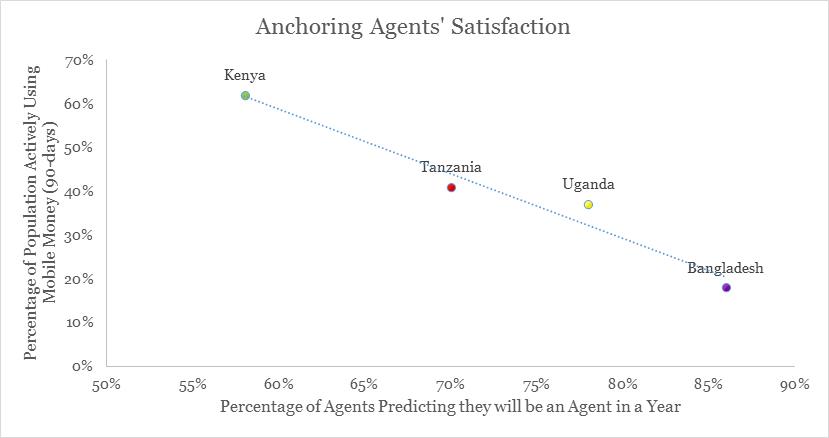 Note: Data on the x-axis is taken from report from respective country reports published by The Helix Institute, while the y-axis data is from InterMedia’s Finclusion research.

Agent to Merchant Transition and Introduction of Master Agents:

In Kenya, Safaricom has reported recruiting over 32,000 active mobile money merchants (December 2014) to complement their existing network of cash-in, cash-out (CICO) agents, however they have had lesser success converting existing CICO agents to become merchants, than new business to serve as merchants.  While there are certainly a number of reasons for this, one of the major ones M-PESA agents report is they were used to earning commissions on CICO and therefore they did not feel like having to pay a fee on merchant transactions was fair.  In essence, they are anchoring the value of the merchant payments to their past commissions.

In Uganda, MTN recently introduced master agents after several years of operations. Whereas agents used to receive 100% of commissions, MTN agents reported they now need to give 10% of their commissions to the master agent.  The agents are now faced with the problem of anchoring to the past commission level they earned. They now feel like they are not getting as good of a deal relative to how the system previously worked.

What Does This Mean For Providers?

When gauging the satisfaction levels of agents in your network, one needs to know much more than just how much agents are earning.  The examples above show that it is also important to understand how it relates to what they were previously earning and how much they expect to earn in the future.  Further, there are critical junctures and trends in the evolution of the business model, like the introduction of master agents, the building of a merchant network, and reducing future growth rates, which must be monitored carefully as they can easily cause agents to anchor to a value that makes them decrease their satisfaction with the commissions they earn. 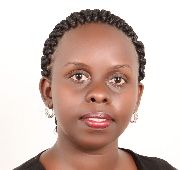