Getting it right: Why counting mobile money agents accurately matters

A person cannot decide to use a financial service until it has been extended within their reach. This blog explores why the counting of mobile money agents accurately is a critical aspect of financial inclusion Financial access is the foundation of financial inclusion.  A person cannot decide to use a financial service until it has been extended within their reach.  Central to measuring access to finance is the number of physical locations in a country where a person can use financial services. Historically, these access points have included bank branches and ATMs. However, with the GSMA’s State of the Industry Report 2016 reporting that 92 countries now offer mobile money services, it is important to measure the number of agent outlets offering these services.

Counting agent outlets in a country is complicated. In fact, many in the industry may be surprised to learn that there is no consensus on these numbers — not even in countries leading the world in digital finance. This is a consequence of having two different methodologies for arriving at outlet statistics, yielding widely disparate results.  The first is a series of censuses conducted as part of the Bill and Melinda Gates Foundation-funded FSP Maps project, which sought to geo-locate all agent outlets in six countries. The second approach aggregates agent numbers providers submit to their respective regulators (as well as to GSMA, in some cases).

While both methodologies have weaknesses, the bigger issue is that they are designed to measure different statistics. Therefore, we have not been able to compare the results.  For example, when the FinAccess geospatial mapping 2015 located 65,970 mobile money agent outlets in Kenya, after the regulator had published a figure of 123,703 agents in December 2014, it was hard to interpret either number.

The discrepancy is easily explained: A census counts up the number of visible and operational agent outlets, whereas providers report on the number of agent tills[1] they have registered on their books. The distinction between active agent outlets and total agent tills is crucial for measuring access, for two important reasons. First, in two-thirds of countries where mobile money is offered, multiple providers are serving the market.  Often multiple providers distribute their services through the same agent outlet. Consequently, when regulators aggregate provider reports, many agent outlets are counted multiple times. Second, from the perspective of access, the only tills that matter are those being used (active tills), and while GSMA calculates inactivity rates, very few regulators publish figures disaggregated by activity.

It would seem that FSP Maps statistics are more appropriate for measuring access to finance, but they present challenges as well. The first is that they are only available for a couple of years, in a handful of countries.  The second is that to date we have not been able to reliably gauge their accuracy. In a new paper titled, “Agents Count”, authored by The Helix Institute of Digital Finance, we make the first attempt to reconcile these numbers and garner consensus around the total number of active agent outlets in five key countries: Bangladesh, Kenya, Pakistan, Tanzania and Uganda.

Our approach adjusts the total number of agent tills that respective regulators report to account for inactivity and non-exclusivity. We use the best available estimates of country-level activity rates and measurements of non-exclusivity collected by The Agent Network Accelerator (ANA) project. In doing so, we find FSP Maps census numbers to be accurate, and the total number of active agent outlets in the five leading digital finance countries to be only 25.6 per cent of the regulator reported figures. This is important, as our literature review shows that it has been popular in the industry to use regulator figures to report the number of agent outlets in a country. 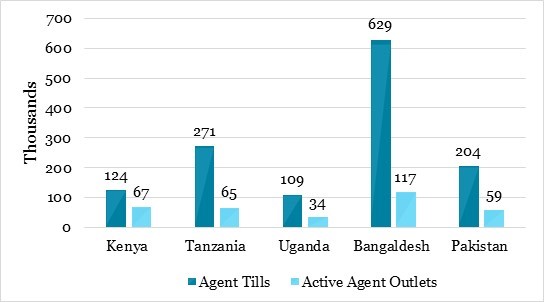 In the paper, Fighting Poverty, Profitably (2013), The Gates Foundation makes four main recommendations to the industry, the first of which is to create baseline statistics in the industry to better measure impact. Insights from “Agents Count” suggest that the industry has overestimated the number of operational agent access points in leading countries by a factor of four.  In a 2014 report by The World Bank, The Gates Foundation, and The Better than Cash Alliance for the G20, titled, The Opportunities of Digitalizing Payments, authors noted: “Providing physical access to financial services or cash-in/out points and ensuring sufficient liquidity at access points, including in rural areas, remain the core challenges in moving toward digital payments.”

To address this challenge we still have many strategic operations work to execute on the ground. Now that we have a better understanding of financial access in key countries, we must track our efforts by accurately measuring progress. Many of the leading organisations in the industry already understand this, but still, lack the data needed to move forward. This missing data underpins the efforts of key financial inclusion initiatives, including:

1. Global Partnership for Financial Inclusion (GPFI) – In 2016, the G20 updated its list of Financial Inclusion Indicators to include digital financial services.  The Access Indicators section now contains the indicator 11D: agent outlets per 100,000 adults. However, the data source listed for 11D is the IMF FAS Survey which compiles regulator statistics, and therefore represents agent tills, not agent outlets.

2. The World Bank is spearheading a program called, Universal Financial Access by 2020 (UFA2020).  One of the major goals of the program is to increase access points by 25 per cent by 2020.  To measure its progress, it has added a new module called “Accounts and Access” to the World Bank Global Payments Systems Survey (GPSS).  This module includes supply side measurements of access points and has specific metrics for agents.  However, the GPSS also obtains its data from regulators, so it will not be able to provide accurate data on agent access points to UFA2020.

3. The Alliance for Financial Inclusion (AFI) has a working group of regulators called, The Data Working Group (FIDWG), which published a list of financial inclusion core indicators (2013) for regulators.  Indicator 1.1 in the Access section recommends that regulators measure the “number of access points per 10,000 adults…” While this indicator does not provide instructions for how to do this, it does define an access point as a “physical entity where an individual can perform cash-in and cash-out transactions.”  Many regulators will not be able to measure these physical entities using current data collection methods.

4. The UNCDF’s Mobile Money for the Poor (MM4P) program works to increase digital financial inclusion in eight countries across Africa and Asia.  In the MM4P theory of change, one of the key indicators of advancement from the expansion to the consolidation stage of development is the number of active agents per 100,000 adults.  Given this data is not currently available, the MM4P will have to invest in data collection in its target countries.

Past analyses based on regulator figures, compiled in this manner, have severely overestimated the level of financial access in respective countries.  While the newly released paper provides clarity on the number of agent outlets in five key countries, it does not cover many other countries of interest, and the methodology relies on research not currently set to continue. This is problematic because all efforts to extend financial inclusion around the world need an accurate baseline measurement of the number of agent outlets and will require tracking this metric in the future to measure progress against their goals. To ensure this happens, plans need to be made now.  In another blog, we outline our recommended steps for doing so.

Please find a link to the full text of the new report: “Agents Count: The True Size of Agent Networks in Leading Digital Finance Countries”.

[1] Till is a provider-issued registered “line”, either a special SIM card or a POS machine, used to perform enrollment, cash-in and cash-out transactions for clients.