MicroSave recently published its ‘State of the Agent Network, India 2017’ report based on our Agent Network Accelerator (ANA) Wave II research. We conducted the research in 2017, based on a nationally representative sample of 3,048 business correspondent agents. The 2017 India report proposes a significant shift from Wave I in 2015.

The report focuses on the operational determinants of success in agent networks. It provides insights on agent network structure and key performance metrics, such as agent viability, quality of provider-support, and compliance and risks related to providers. The report presents changes that have happened over two years, from 2015 (when we had conducted Wave I of the research) to 2017. This blog highlights the ‘change story’ from 2015 to 2017.

During this period, a number of changes have happened. New types of financial institutions, such as payments banks have emerged, support systems have improved, while product matrices have widened. Also, agent networks have managed to successfully position themselves as delivery channels for various financial and non-financial services.

Over the past few years, the story of financial inclusion in India has shifted from account opening to account usage. This change has received support from various policy moves by the government, an interoperable payments system, and the ubiquity of Aadhaar. This makes India stand out as a successful example of policy imperatives driving the agenda of financial inclusion. The following section presents key findings from ANA Wave II research including changes from the Wave I study. 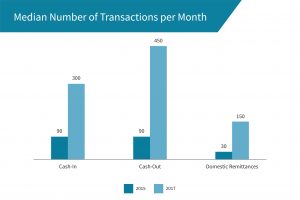 ANA research findings suggest that an increasing use of agent points for Cash-In and Cash-Out (CICO) transactions and remittances have led to increased transactions and subsequently, higher revenues and profits for agents. The graph below presents the median number of cash-in and cash-out transactions, as well as remittances in 2015 and 2017. During this time, cash-in transactions have grown more than three times, while cash-out and domestic remittances have grown five times. The growth in transactions, together with G2P facilitation services, have led to a robust use-case for agents across India. This has, in 2017, translated into higher monthly median revenues and profits, which doubled from their 2015 figures (USD 40 to USD 93 and USD 16 to USD 31, respectively).

2. Interoperability of Payment Infrastructure and Licensing of Payments Banks have begun to Reshape the Market. 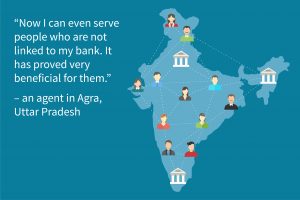 India has embraced full system interoperability, which has enabled banks and mobile financial service operators to connect to a common platform or switch, thereby facilitating transactions. ANA findings suggest that almost two-thirds of agents conduct interoperable transactions. This trend is similar across locations, be it metro, non-metro, or rural. Approximately 70% of interoperable agents offer cash-in services, while approximately 60% offer cash-out and remittances for other banks. This also explains the reduction in the number of non-exclusive agents in India. Agents are no longer required to be associated with multiple providers to be able to serve more customers. It is widely established that interoperability offers significant benefits for the wider ecosystem. These benefits include wider adoption, higher transaction volumes, and greater velocity of money in the ecosystem.

In 2015, the Reserve Bank of India (RBI) gave “in-principle” approvals to 11 payments banks. These payment banks are able to provide all banking services with the exception of credit. New to the financial system landscape, payments banks are beginning to show their presence. However, they have some distance to travel. Agents of payments banks presently conduct a median of nine transactions compared to 33 conducted by agents of other banks. Payments bank agents earn median monthly revenues of USD 54 as compared to USD 93 earned by agents of other banks at the country-level. 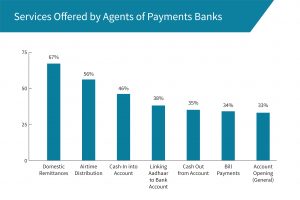 Providers in India have institutionalised the agent induction process by providing training to agents in the first three months, followed by refresher training. There has been a significant rise in the proportion of agents that received induction and refresher training in 2017 (77% and 87% respectively) as compared to 2015 (59% and 61% respectively). From our earlier assessments, we know that trained agents are able to perform better, are more compliant, and extend better customer service. Evidence from ANA India Wave II further supports this hypothesis. Our findings indicate that trained agents conducted almost 10% more transactions on a daily basis than untrained agents.

However, regular monitoring by providers has seen a dip. With increasing transaction volumes at the agent points, providers need to ensure that monitoring remains a top priority. The findings of the ANA Wave II suggest that agents that were monitored regularly conducted four more transactions per day than those not monitored regularly. Anecdotal evidence further suggests that regular monitoring of agents builds the trust of agents in the provider. Instances of agents experiencing incidences of money loss (fraud) have increased from 2% in 2015 to 22% in 2017.  New compliance concerns have also emerged from the ANA Wave II study. Among agents, 35% reported assisting  customers by entering transaction PIN or password on their behalf. Moreover, 24% of agents reported that they provide handwritten slips as proof of transaction to customers as opposed to printed receipts. Providers therefore need to incorporate fraud typology and mitigation measures into training modules for agents. Driven by ever-changing global standards for delivery of financial services, regulators have been updating regulations and enforcing existing rules. In 2015, the Reserve Bank of India (RBI) issued a ‘Master Circular on Frauds – Classification and Reporting’. The circular has placed the primary responsibility for fraud prevention on banks. Providers in India have been upgrading their systems and incorporating recent technological advancements, such as cloud-based systems and adopted SMS or IVR-based payments to prevent instances of fraud.

Agent networks in India have proven to be not only resilient but unique. This can be attributed to policy initiatives, such as interoperable payments systems and market dynamics. While the sector has made positive strides and appears to be stabilising, risk and challenges remain. Provider must therefore address increasing incidence of fraud and compliance issues related to interoperability immediately.

To ensure agent viability, either a more efficient distribution strategy or product matrix or both would be required. Meanwhile, a few issues needs to be understood. Why is it that operating costs at agent points are the highest in India? Does it have anything to do with the multiple front-ends required for acceptance of card and Aadhaar-based transactions? Consequently, agent profitability remains a key concern in India. Agents have not yet managed to get to sustainable levels of profitability. Moreover, the likelihood of agent dormancy and dropout remain high.

In this regard, differentiated agent outlets, as advocated by MicroSave could be a potential solution to address issues of agent profitability. While sales agents would manage higher value transactions and sales of sophisticated products, service agents would do basic, everyday transactions, without requiring any sophisticated backend infrastructure. 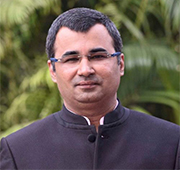