In this blog, we look at the fundamental issues of agent profitability, and the related issues of customer education (or marketing!) and the product range available to drive transactions.

In the previous blog, we looked at the challenges presented by fraud, armed robbery and customer service. In this blog, we look at perhaps even more fundamental issues of agent profitability, and the related issues of customer education (or marketing!) and the product range available to drive transactions. 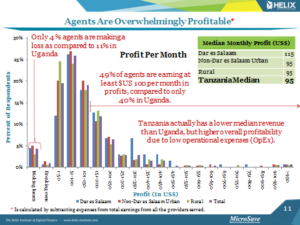 Just under half of the Tanzanian agents are making more than $100 profit per month (see graph) … but many are making losses or very small profits. Those agents making less than $50 profit per month are inevitably going to start asking themselves whether offering digital financial services is worth the time, energy, money (for float) and effort invested.

In addition to the limited product range (discussed below), agent profitability is also compromised by two other important factors. Firstly, system downtime is still prevalent- in Tanzania and Uganda in particular. While it varies significantly across the different providers, almost all agents report experiencing system downtime, and estimate that on average each episode of downtime costs them about 10 transactions.

Secondly, but more importantly, in both Tanzania and Uganda agents are turning down transactions for want of e-float (or in some cases cash). In Uganda, agents turn away an average of 3 transactions a day for want of float, in Tanzania, they turn away 5 transactions or 14% of average volumes each and every day. Small wonder that many are struggling to achieve profitability! 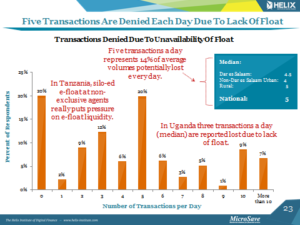 Sadly, in the absence of interoperability amongst providers’ systems, non-exclusive agents have to hold separate e-float for each provider they service – thus increasing both the cost of their digital financial services and potential of them running out of e-float for any particular provider.

Time taken to teach customers about the service

Even though the markets for digital financial services is relatively mature in Uganda and Tanzania (both countries contain several of MMU’s “Sprinters”), agents are still struggling to educate customers about the service. This is probably one of the reasons why over the counter (OTC) transactions are so popular in many markets (particularly Bangladesh, Ghana and Pakistan). If providers want to avoid the OTC trap, there is clearly a little more thinking to be done on how best to support agents (and ideally the sophisticated customers using the service extensively) to explain the nature and potential of the service to existing and potential customers. 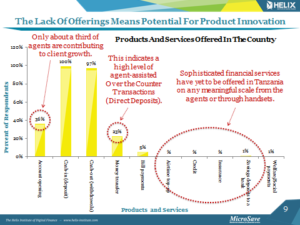 But there is a more fundamental concern here, services at agents in both Tanzania and Uganda are almost universally limited to cash in/out, account opening, limited bill pay, airtime top-up and some OTC transactions. Despite the apparent lack of competition, Kenya is seeing a rapid growth in savings/ credit products (primarily through M-Shwari), and in merchant and other payments (primarily through Lipa Na Pesa).

However, one of the most striking results from the ANA surveys has been how narrow a range of products is offered through different provider channels in both Tanzania and Uganda. In both countries, very few agents are offering much beyond cash in/out, account opening and over the counter (money transfer) transactions – which of course undermines the potential of a wallet for self-initiated transactions and ultimately a cash-lite ecosystem. Fewer Tanzanian agents (see graph) offer OTC money transfers (23%) than Ugandan ones (30%), and fewer Tanzanian agents offer bill payments (5%) than Ugandan ones (17%). And while no Tanzanian agents offer airtime top-up, 17% of Ugandan agents offer this service. So even amongst the limited range of products offered by agents in the two countries, Tanzania seems to be lagging. Perhaps this will change with the recent announcement of M-Shwari for Tanzania.

But, ultimately, to reduce the agent churn that appears to be so prevalent even in the mature East Africa markets, providers will have to increase agent profitability. This is unlikely to come through enhanced commissions, which are under pressure from competitive forces already, so increasing the number of transactions that each agent processes are likely to be key. The current rates of 30-35 transactions per day in Tanzania and Uganda, and of around 45 per day in Kenya, leave too many agents struggling to make the money they need to stay in business. This is evidenced by the fact that in the Kenya ANA study only 58% of Kenyan agents said they thought they would be an agent in one year’s time.

Clearly mature markets are by no means stable markets!