Discussions around Master Agents are often confusing. This confusion usually stems from the varying terms used to describe them. This lack of uniformity runs into their roles and responsibilities as well. This blog offers practical advice and shares some best practices, on how to manage Master Agents during the evolution of a roll-out. Discussions around Master Agents are often confusing.  This confusion usually stems from the varying terms used to describe them. While to some providers they are ‘Aggregators’, to others they are ‘Distributors’, ‘Super Agents’, or even ‘Super Dealers’. This lack of uniformity runs into their roles and responsibilities as well. The first blog in this series clarified some of the confusion around who Master Agents are, what they do, as well as the benefits and challenges they bring to a digital finance business. This second blog offers practical advice and shares some best practices, on how to manage Master Agents during the evolution of a roll-out.

Introducing Master Agents into the network 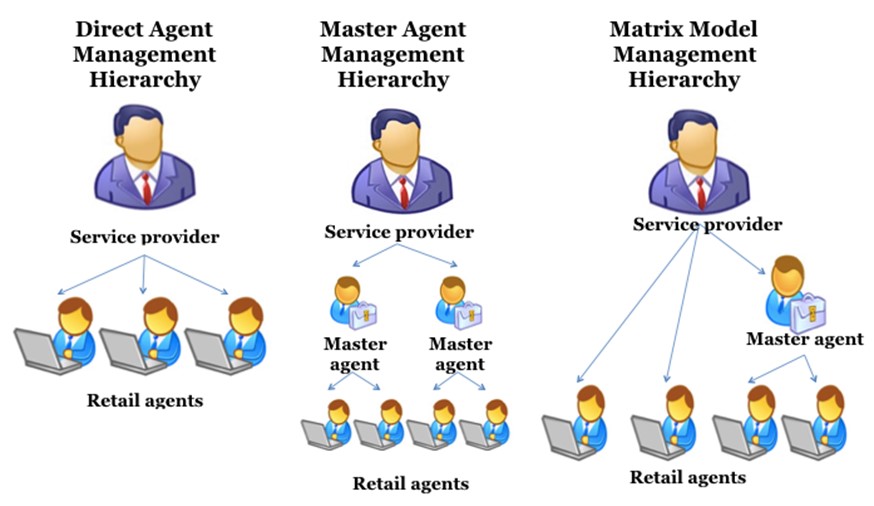 Many successful digital finance businesses, such as M-PESA in Kenya and Airtel Money in Uganda, started their roll-out by managing their agents directly and then transitioned to a Master Agent model. This gave them more control in the initial stages of development – enabling them to put systems and processes in place, and allowing them to easily iron out any problems that arose in the process. During this first phase of development, when the focus is on the quality of agents, and not quantity, we recommend that Master Agents be not used in the management process. It is the second stage of development when the focus shifts from quality to quantity of agents, and as providers enter the battle for a share of the marketplace, that we recommend Master Agents are introduced. Although Master Agents are not a quick fix for scaling operations, they can be of significant help, and this is why they are typically introduced at this stage.  Their primary role is to help with selecting and onboarding more agents and managing them in order that providers can focus aggressively on enrolling customers.

This is exactly what M-PESA Kenya did. They started with a small number of directly managed agents, then transitioned to a Master Agent model once they began to aggressively grow their agent network (Figure 2). During their pilot from October 2005 to March 2007, M-PESA directly managed eight agents serving 500 customers. After their commercial launch, although they began to grow their agent network, they still managed the first 2,000 agents directly. In early 2008, with the number of agents rising, the Master Agent model was introduced, with Safaricom recommending that each Master Agent manage a maximum of 200 agents. 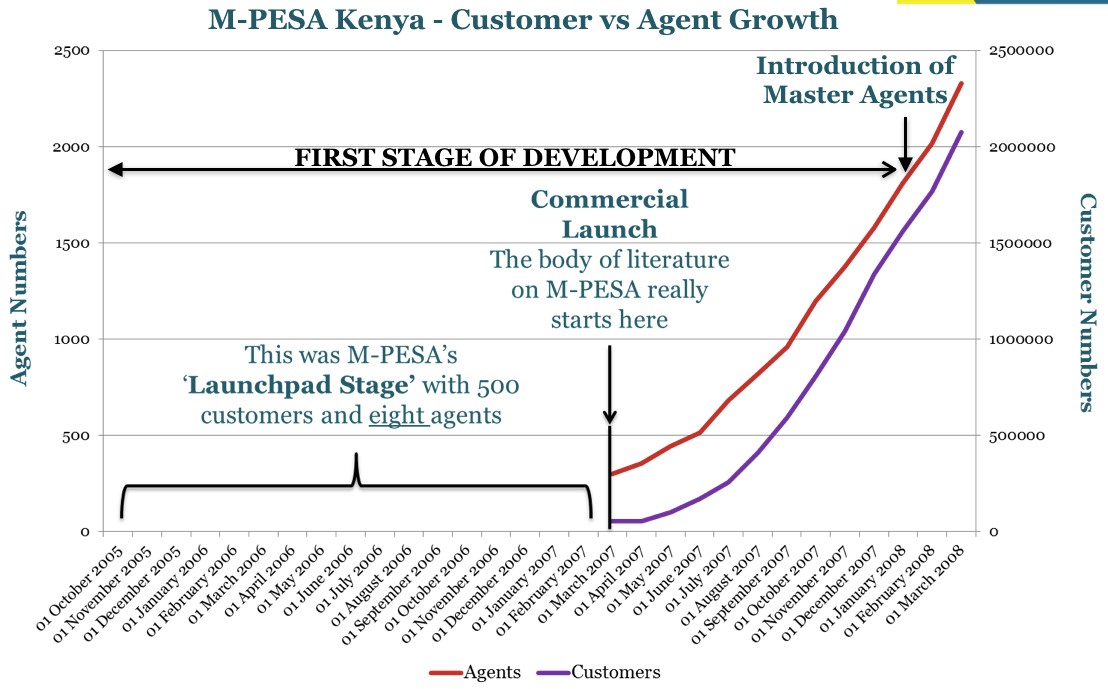 However, it may be noted that M-PESA’s transition to a Master Agent model was not part of any predetermined plan. As the service gained popularity from early 2007, agents started to apply for more M-PESA tills, issuing these additional units to their relatives and friends.  Since the original Direct Agent management structure was still in place, commissions were sent directly to the agent that had applied for these tills, not to the ‘sub-agents’ they had issued them to. As a result, Safaricom began to receive complaints from sub-agents regarding lack of compensation. By this stage, some ‘Master’ agents were managing and reaping the benefits from, over 50 tills.  To rectify the situation, Safaricom was forced to redesign its model. Consequently, the Master Agent model was introduced, which created a distinction between ‘Master Agents’ who owned the tills, and sub-agents who used them to manage cash-in/cash-out requirements. Commissions were also distributed accordingly, with 20% allocated to Master Agents and 80% to sub-agents. Despite the unplanned origins of M-PESA’s Master Agent model, it has become an industry best practice, followed by many digital finance roll-outs.

Although some successful deployments, such as MTN Uganda, were able to scale without introducing Master Agents until four years after launch, there is cause to believe that they are now struggling with their Master Agent model. Insights from the field reveal that some MTN Master Agents are managing over 1,000 agents, without the suitable technology, such as a back-end portal, to support the process. MTN’s drop in agency presence in 2015 is believed to be, in part, due to their struggles with agent network management.

As the roll-out matures, there is an emphatic shift in the roles and responsibilities that Master Agents undertake. Notably, in mature roll-outs there is less focus on aggressively recruiting and onboarding new agents. Although agent acquisition never stops, it is most intensive in the early years. Further, in some mature or rapidly expanding markets, the growth of the system may also mean that they can no longer meet the liquidity management capacity needed to support their agents. In these markets, providers often work with Super Agents (typically banks and other financial service institutions) to provide liquidity to their agents and Master Agents.

Despite changes to their roles and responsibilities, we believe that Master Agents will continue to be in demand as long as retail agents exist. As providers launch new products, and new regulations are introduced, Master Agents will be required to conduct refresher training, and manage agents through the evolutionary process. Other key responsibilities such as fraud management, as mentioned in the first blog, will continue throughout the lifecycle of the roll-out. 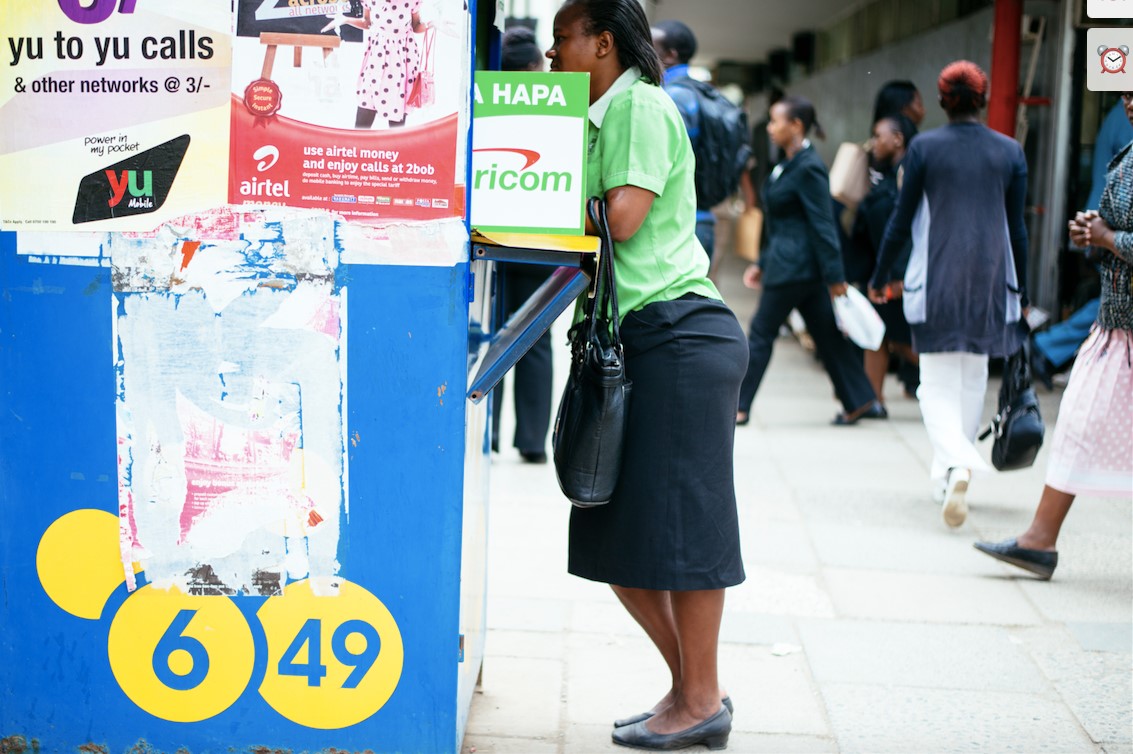 Fundamental to the success of this model is clear communication between providers and their Master Agents. The Master Agent model will grapple with management problems if they are expected to manage too many agents, as in the case of MTN Uganda, or if changes in their roles and responsibilities are not clearly communicated to them. Without setting these parameters, Master Agents will struggle to provide retail agents with an adequate level of support, worthy of the commissions they earn. If Master Agents fail to deliver quality service, they risk becoming an inefficient cost to the network, which can affect the overall profitability and affordability of the service.

Do Master Agents Have a Best Before Date?

This blog offers best practice advice as to when providers should introduce Master Agents into the roll-out. Ideally this should be during the second stage of development, when systems and processes are in place and the focus has shifted from improving the quality, to increasing the quantity of agents. As the network matures, providers must strategically manage their Master Agent to retail agent ratio, in order to continue getting value from the Master Agent model. Providers must also clearly communicate Master Agents’ shifting roles and responsibilities. We believe Master Agents will continue to play an important role until the whole business model evolves to a point at which customers pay for small ticket, retail goods digitally. Only when customers no-longer require the cash-in/cash-out services of retail agents, may the role of Master Agents be in jeopardy. But that time, we suspect, is still a long way off.

Annabel has recently completed a Masters Degree in Development Studies at SOAS in London, UK. She is currently working as a freelance consultant on various digital finance / mobile money projects. Previously Annabel worked as a Senior Manager in the Digital Financial Services Department at MicroSave, based in Nairobi Kenya. At MicroSave,  Annabel worked on The Helix Institute of Digital Finance project, where her work focused on providing in-house technical assistance consultancy to digital finance providers, training providers on different technical areas of digital finance, and supporting the development of thought-leadership publications.