The Agent Profitability Conundrum in India – Time for Differentiated Agents?

The blog highlights agent profitability conundrum in India. Is it time for differentiated agents? As half of agents in India are dedicated, with agency business being only source of income.

May 3, 2018 by Graham Wright, Karthick Morchan and Manoj Sharma 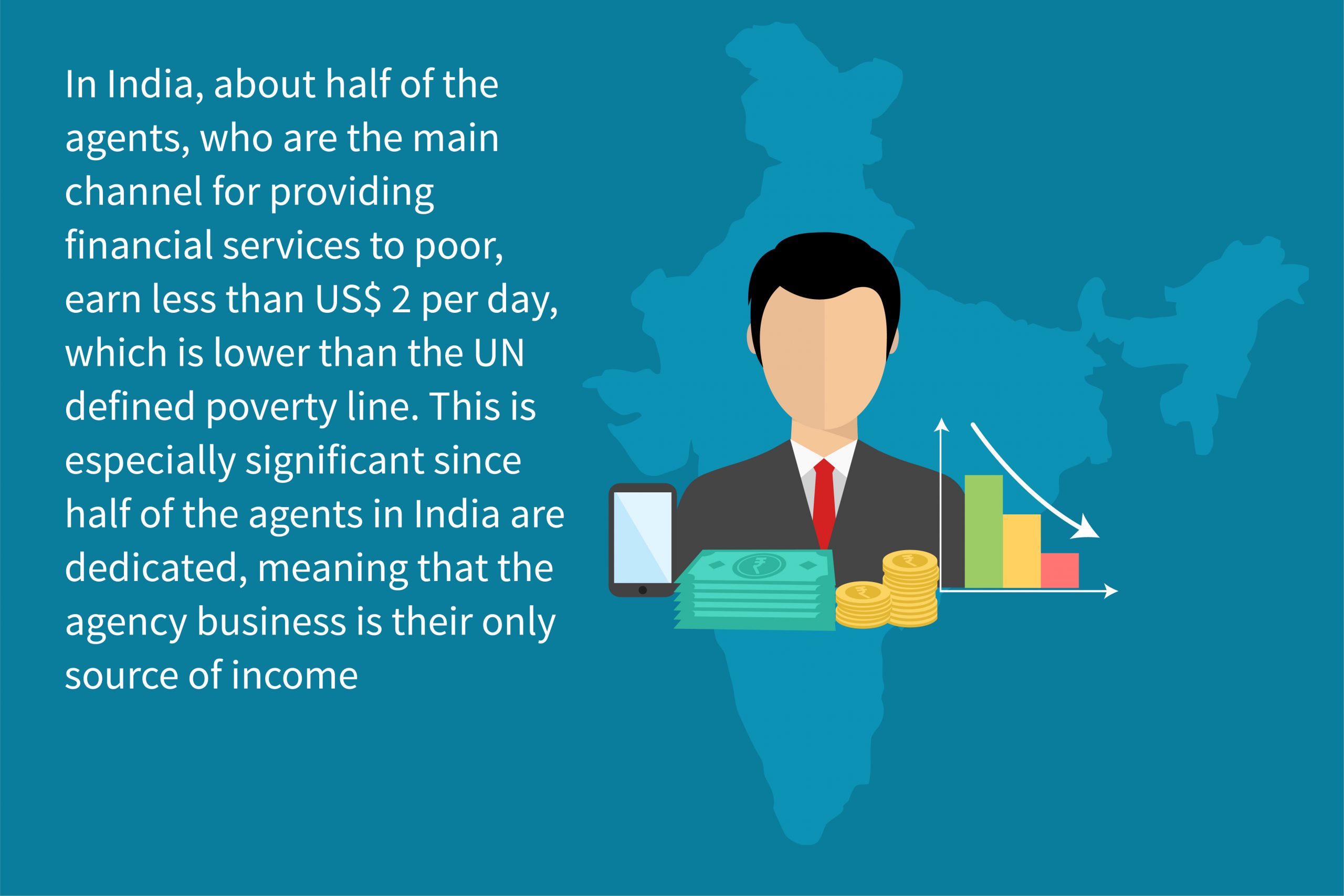 However, agent profitability has to reach sustainable levels or else, agent dormancy and dropout will rise. 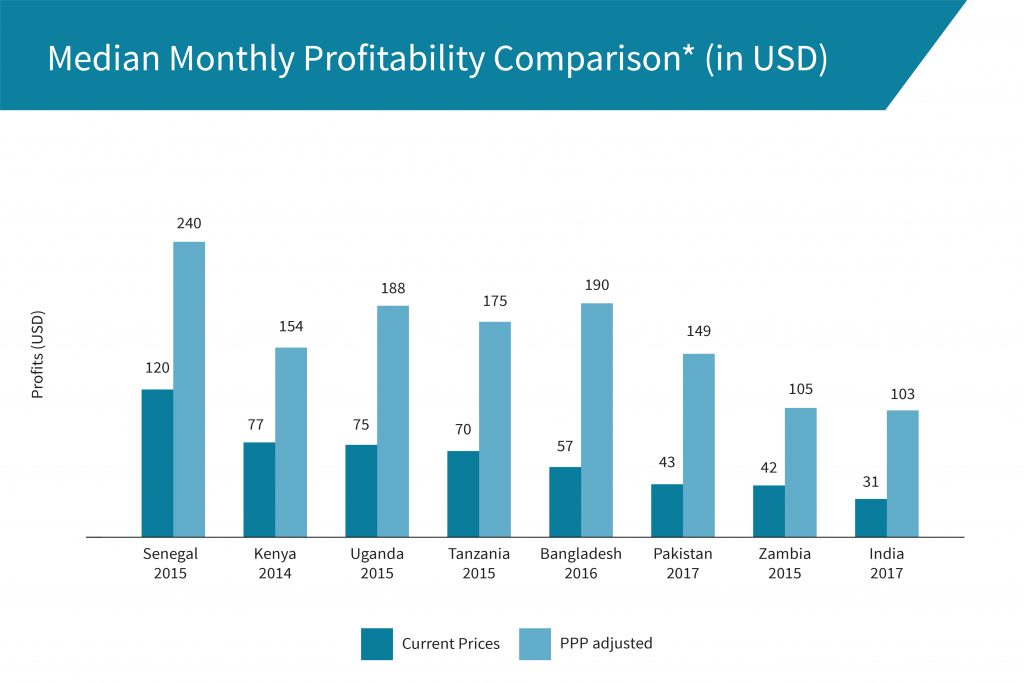 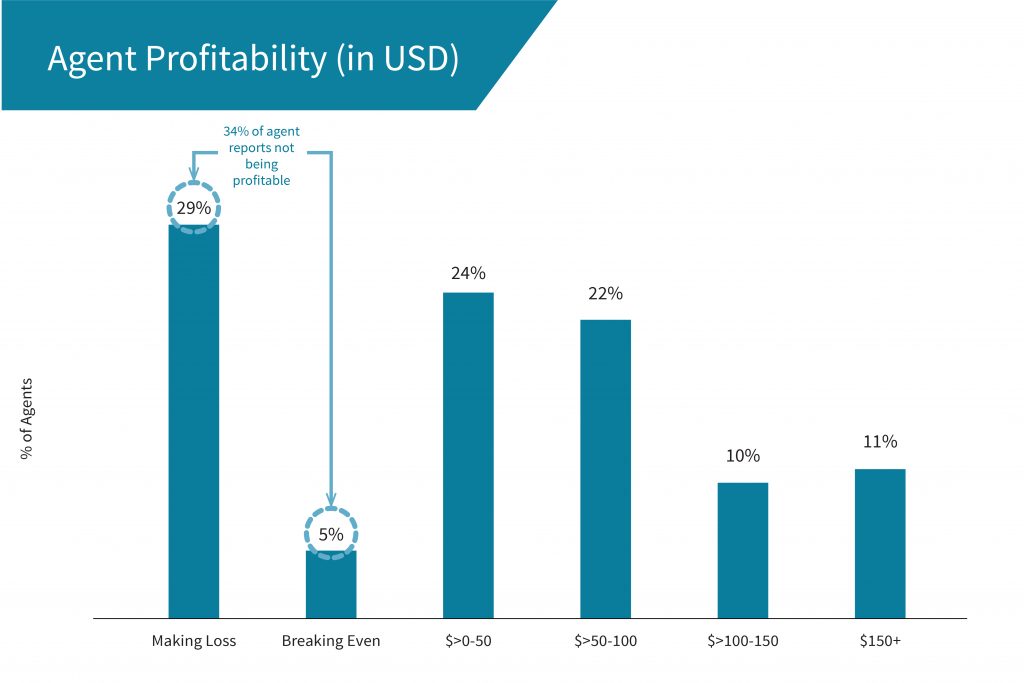 Previous studies indicate that agents in India expect a minimum income of USD 118 per month to consider their business sustainable. However, in part because of liquidity management challenges, operating expenses in India are higher (USD 62) than in other South Asian countries (Pakistan: USD 28; Bangladesh: USD 13) and East African nations (Kenya: USD 35; Tanzania: USD 25) and is comparable only to Uganda (USD 58). 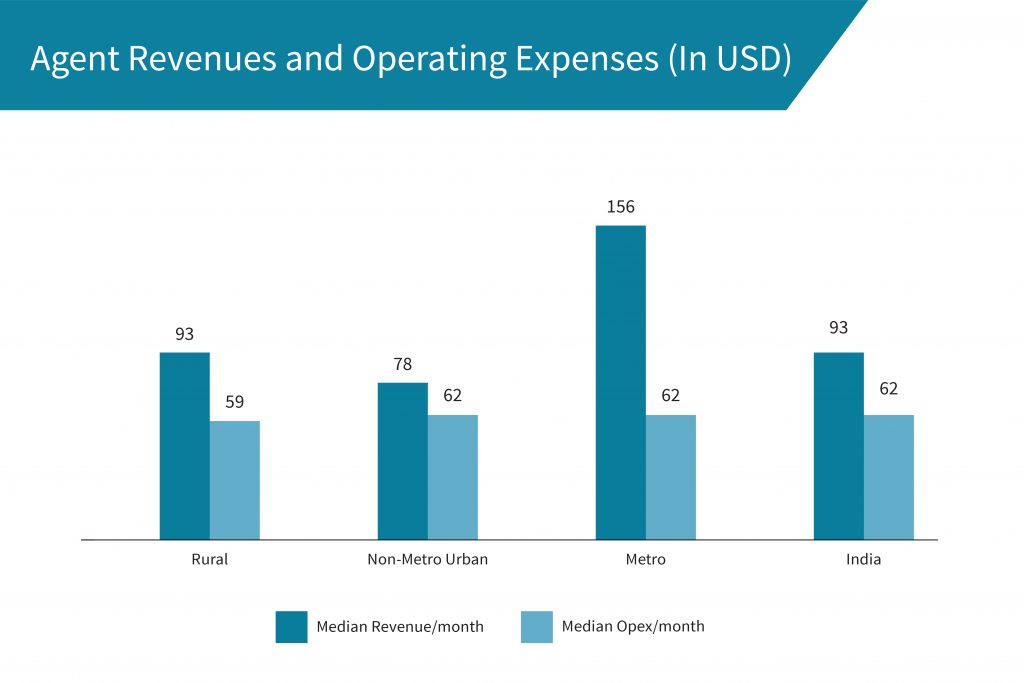 Past MicroSave research indicates that rent of shop, electricity, and travel expenses for liquidity management constitute the bulk of operational expenses for agents.  The expenses for agents in India are high when compared to other South Asian countries. This is because half of the agents in India are dedicated as opposed to Pakistan (77% non-dedicated) and Bangladesh (96% non-dedicated) and Indian agents have to allocate full costs of the outlet to the agency business.

However, a significant proportion of expenses are driven by devices to conduct transactions – front-end devices for biometrics (Aadhaar), supplemented in some cases by computers. Unlike in other countries, agents in India typically use a multitude of front-end devices for agency banking operations. 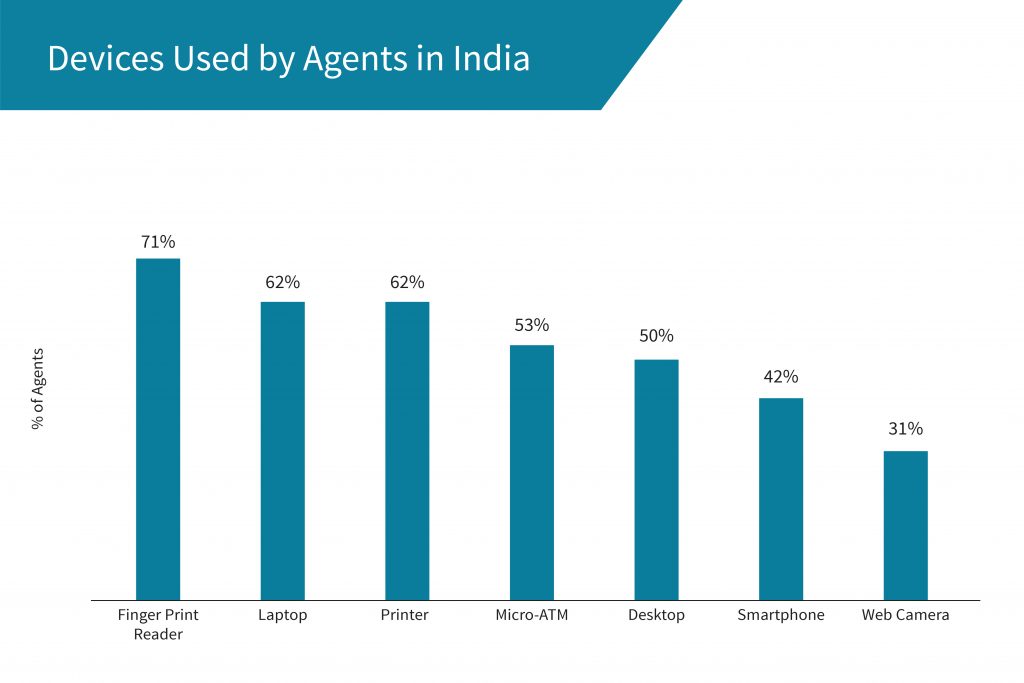 Expenses at the agent-point further increase due to power backup systems required in areas where power-outs and load-shedding are common. See Transaction Economics for Technology Enabled Branchless Banking. The median monthly operating expenses for agency banking vary according to the devices used by the agent. 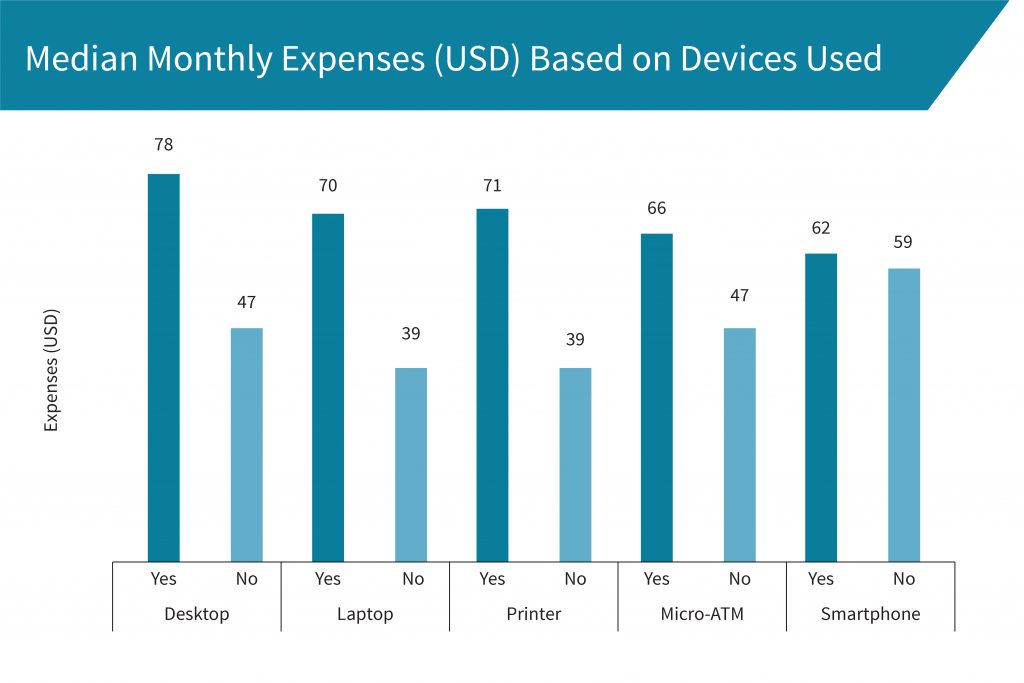 Uber-ising CICO Agents
One idea worth exploring is to reduce the dependence on agents by empowering every customer to act as a CICO point. This is akin to the app-based transport model of Uber, where users can avail cab services at almost any point. The CICO system will increase cash accessibility for customers and ensure less dependence on the scarce number of available agents. For providers, this would mean an increased outreach of CICO points and reduced agency management costs.
Customers may also get the benefit of convenient and proximate cash-out, leading to a lesser need to cash-out in bulk. Fintech companies can develop smartphone applications that enable users to act as liquidity merchants ― mimicking what Uber has done for transportation. Similar initiatives can help address the cash-needs in the ‘last few hundred yards,’ while agents provide the ‘last-mile’ backup underpinning a more decentralised cash market. To make this work effectively, the idea of Uber-ising CICO agents needs to be ubiquitous and interoperable across providers. However, at the moment, the idea can face regulatory hurdles, as RBI does not allow individuals to act as cash-out points. Another potential risk could arise from unscrupulous individuals acting as cash-out points, which could become a security risk.
– Re-Imagining the Last Mile – Agent Networks, 2016

Sales agents are usually located in towns with higher footfall and with easier access to bank branches for rebalancing and support. This is because their location allows them to manage transactions of higher value and sale of sophisticated products. These sales agents are likely to be (but not necessarily)  exclusive to a specific bank and are linked through computers to that bank’s core banking system.

Basic service agents do not need sophisticated front-end devices to conduct CICO transactions. In such cases, a smartphone and a basic fingerprint or card reader is adequate. Indeed, at the extreme, anyone could become a CICO point. This is happening informally across the globe. Wherever CICO agents are not easily available or liquidity is an issue, people exchange e-value for cash and vice versa among themselves for a mutually-agreed commission. Some service agents could also become mobile agents who can cater to the demand in sparsely populated and remote areas.

If this is too radical an idea, another alternative would be to permit ‘white label’ agents to operate. White label agents act as agent networks for banks or financial service providers with direct access to settlement systems. Our 2017 Agent Network Accelerator survey indicates that 94% of agents remain exclusive and tightly coupled to one bank. Utilising white label agents can de-link agents from specific banks and thus reduce exclusivity across India. The Reserve Bank of India’s Committee on Comprehensive Financial Services for Small Businesses and Low-income Households recommends such ‘white label business correspondents’. DFS expert Ignacio Mas also supports this idea.

Given the predominance of cash-out transactions in rural areas, agent outlets act as human ATMs. India has already permitted white label ATMs, wherein a third-party owns and operates a network of ATMs under its own brand and not necessarily for or by a particular bank. Indeed, they are already relatively common, due to high costs of running proprietary ATMs. Similarly, white label agents would be able to serve a large number of customers of various banks at a lower cost, thus bringing economies of scale.

This will also help establish a network shared by multiple banks and free up agents and agent network managers from depending on sponsor banks for operational decisions and for expansion of outreach. It will also eliminate the need for individual banks to set up parallel BC networks. Finally, and perhaps most importantly, this could result in better returns for front-line agents, and lead to a viable and sustainable financial ecosystem, which in turn would improve both outreach and customer convenience.