Reports suggest that two out of three women in PNG face domestic abuse. Due to a lack of formal saving facilities for them, women’s hard-earned money often ends up with their husbands, who usually waste it on gambling or drinking. This blog highlights MiBank’s efforts to bridge the gender gap by introducing gender-centric products.

“This is my first ever bank account,” says Mary Ladim, a 60-year-old from Goroka, Papua New Guinea (PNG). Mary has opened a Hibiscus account, which is a special bank account targeted to women in PNG, at an agent outlet of MiBank. She believes this account will provide her security and stability.

Below, we’ll discuss how MiBank, a micro-bank in PNG, accelerates women’s financial inclusion through gender-transformative strategies. The bank has a women-centric product design and uses its agent network to reach a wider audience. But before we discuss MiBank, let’s take a brief look at the status of gender equality in PNG.

The struggle for gender equality in Papua New Guinea

Out of the 157 countries assessed by the United Nations Development Program’s Gender Development Index, PNG ranks 124 on the Index with a score of 0.529. Women have limited opportunities for employment in PNG, with only 5% of the women workforce engaged in formal employment. Efforts made by the government to encourage women to enter into formal employment have largely been ineffective. While many women work in the informal sector in both urban and rural areas, the lack of data makes it difficult to report the exact numbers. But it’s widely known that women working in the informal sector are commonly engaged in activities that earn little profit, including the sale of agricultural products and home-cooked food in markets or on streets.

Reports suggest that two out of three women in PNG face domestic abuse. Due to a lack of formal saving facilities for women, their hard-earned money often ends up with their husbands, who often waste it on gambling or drinking. Despite working tirelessly in coffee fields, betel nut markets, vegetable gardens and honey farms, women often fail to get their fair share of agency over financial resources. In the Pacific region, PNG has the highest gender gap in financial inclusion, with women 29% less likely to have access to formal financial services.

Despite this clear need, addressing women’s financial exclusion in PNG presented a challenge to MiBank, when it attempted to boost inclusion through its MiCash bank account offering.

“When MiBank initiated the MiCash mobile wallet, the percentage of women’s bank accounts was approximately 25% in PNG, which is similar to the industry average,” says Tony Westaway, the bank’s CEO. “We set a financial inclusion target of 50% women account holders. With the launch of the MiCash mobile wallet, the percentage lifted to 38%. We believe that women liked the confidential nature of having a bank account on a mobile phone. However, the percentage of women account ownership did not move beyond 38%. We could not get it to climb until we introduced a ‘women-only’ dedicated product.”

In response, MiBank launched Hibiscus, a deposit product that was specifically designed as a bank account for women, with add-on features that went beyond MiCash’s offering. Hibiscus has the following unique features:

Hibiscus constitutes 56% of the total accounts at MiBank, as of September 2020. This uptake has made it a successful product for MiBank and was evident from its Agri-Agent Network Innovation Lab, which operates in Goroka, the capital of the Eastern Highlands Province of PNG. The lab is supported by UNCDF’s Pacific Financial Inclusion Programme, and its core focus is to enhance financial services access in PNG in a commercially viable manner, with a particular emphasis on women and farmers, according to Jagdeep Dahiya, country manager at UNCDF PNG. While the key objective of the lab is to test different agent network models that promote financial inclusion, it has also helped generate clear lessons on how the Hibiscus product advanced the financial inclusion of women. (Learn more about the innovation lab here.)

In Goroka, agents opened a total of 5,459 accounts in 12 months. Out of these, women opened 79% of the accounts, while men opened the remaining 21%. For many of these women, it was their first account. 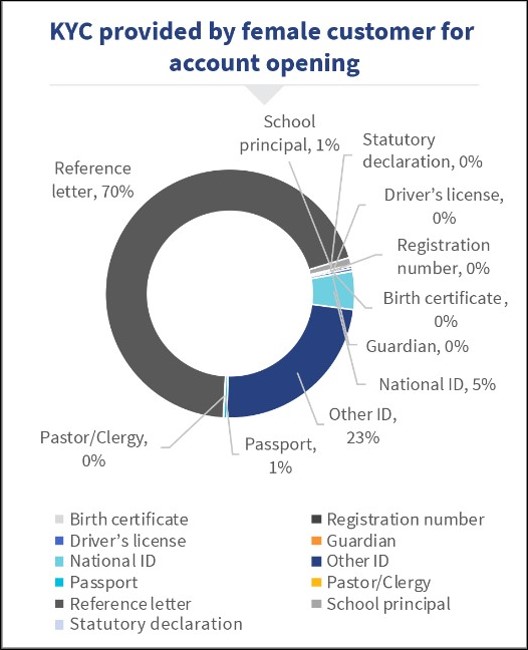 Other than the strategic decision to launch the Hibiscus account to target women customers, MiBank made two critical changes to its product offerings in Goroka. These changes affected women more than men: 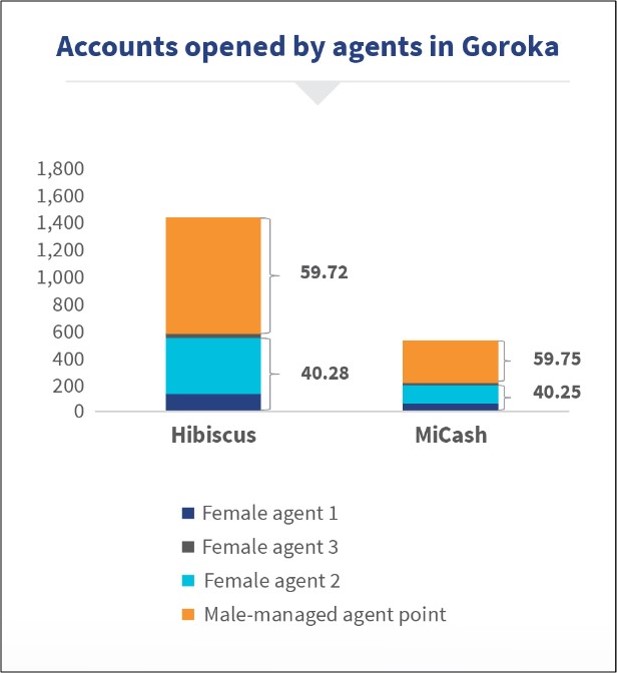 This access to female agents also facilitated change in financial behavior among women. Although amounts deposited per account for women remain almost half that of men, the bank generated more deposits with women accounts than male accounts. In 12 months, a total of 4,292 Hibiscus accounts mobilized US $98,222 in deposits – a tremendous response, from MiBank’s perspective.

As MiBank’s innovation lab expands its activities beyond Goroka, we estimate a ten-fold increase in total deposits into Hibiscus accounts over the next two years. This will happen in part because women in business and elderly women now have access to banking points near their markets. This makes it easier to save their daily earnings. Previously, these women had used traditional methods of saving, either hiding the money inside a pit or in bamboo poles. As a result, the cash was often soiled or even lost. They can now use MiBank’s deposit service conveniently every day through the nearest agent point.

How to increase women’s inclusion takeaways for banks

Ultimately, for banks that want to increase product uptake among women, it is essential that senior management develop product and services specifically for women customers. This will require them to address women’s unique challenges in accessing financial services.

The senior management at MiBank decided to make changes to their Hibiscus account product design to serve the large unbanked and under-banked women customer segments – without delaying the product launch due to overly lengthy analysis of the business case for each change. The management recognized the barriers around women’s access to formal financial services and saw business sense in capturing the segment – then they moved confidently to act on this assessment. They realized the value of servicing such women customers and designed appropriate products for them.

This blog was also published on Next Billion on 24 November 2020. 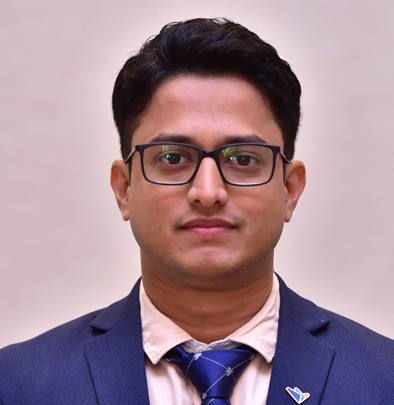